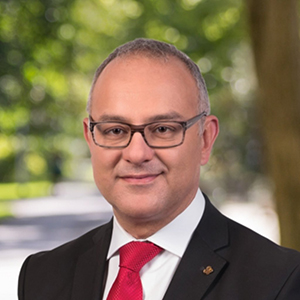 City Councillor of Norman-McLaren, district of Saint-Laurent Borough, Mr. Salem held various positions at the City of Montreal since his election in 2009. He was also a member of the executive committee, in charge of Montreal Public Transport between the year of 2013 and 2017.

After the contribution and engagement to social and community activities into the Laurentian community since 1995, Mr. Salem is currently the president of the council of administration for Cégep Saint-Laurent. He shows great interest in the field of the development of social economic and environmental responsibility. He earned two bachelor degrees, one is in Microbiology from the University of Montreal, and the other is in Business Administration from HEC Montreal.