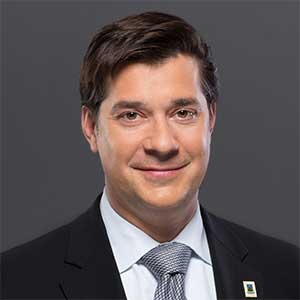 Philippe Roy is a lawyer with a Bachelor of Laws (Université de Montréal) and a diploma in Public Relations and Communications Management (McGill University). He also holds an Accreditation in Public Relations (APR) from the Canadian Public Relations Society. He has been Mayor of the Town of Mount Royal since October 2010, in addition to being Vice-President at PEAK Financial Group.

Philippe Roy began his career as a parliamentary assistant in the House of Commons in Ottawa before being appointed Communications Director of an important labour union in Montreal. In 2000, he joined the PR firm National. In 2002, he took on the role of Press Secretary for the Mayor of Montreal. One year later, he was appointed Communications Director for the Bureau de transition de l’encadrement du secteur financier, a transition bureau created by Quebec’s Minister of Finance that aims to implement a new body to regulate Quebec’s financial markets, namely the Authorité des marchés financiers. Philippe spent the next four years at the Authorité des marchés financiers, first as a spokesperson and media relations manager, then as a member of the education and awareness programs management team.

In 2008, he joined Ryan Affaires publiques, a reputable lobbying firm, where he spent a decade leading important public and government relations campaigns. In 2018, he was appointed Vice-President of PEAK Financial Group.

Philippe was elected Councillor for the Town of Mount Royal in 2005. Following his re-election in 2009, he became Town Mayor in 2010 (elected by acclamation) and was re-elected (again by acclamation) at the 2013 and 2017 general elections.

Throughout his career, Philippe has played an active role in the Greater Montreal community, notably with Heritage Montreal and the Chambre de commerce et d’industrie de Saint-Laurent/Mont-Royal.